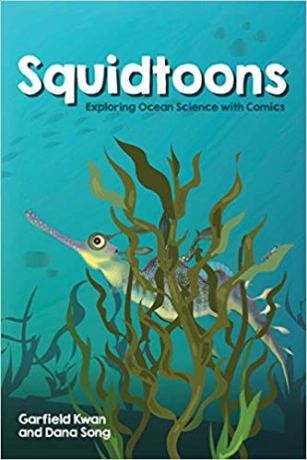 If you love the ocean and want to have some fun learning more about it, I’ve got a book for you. Squidtoons: Exploring Ocean Science with Comics by Garfield Kwan and Dana Song was just released last week and is now available for purchase on Amazon. The webcomic started off as a passion project, and now their work has been published as a full book and a joy for any age group.

Garfield, a PhD candidate at the Scripps Institution of Oceanography, studies fish physiology, but he has always loved comics. He spent much of his youth in Hong Kong where he reading Garfield comics—this is how he eventually chose his English name. He never imagined himself becoming the author of a comic book himself.

He decided to start writing comics of his own as an effort to help address the problem of public perceptions of basic science. Sometimes, to pursue complex answers about the fundamentals of an organism, scientists design experiments that look funny from the outside. Garfield’s example is the “shrimp treadmill study”, an experiment that helped elucidate key aspects of shrimp metabolism, but was highly criticized by politicians and the media for being “silly” and “wasteful”. As a scientist, Garfield understands the importance of the study, and made it his goal to strive for better communication of research projects.

He felt that he could explain his own science with more clarity if he enlisted the help of an artist, specifically his friend Dana. Thus Squidtoons was born.

“While the book is listed to be for kids,” says Garfield, “I think it is for everyone.” Squidtoons does a great job of presenting accurate, well researched science in an illustrative, accessible medium. Each comic addresses a different subject in the ocean so that “science is the main character” of the book. The pictures are bright and the writing is simple, which was Garfield’s goal. He wanted to create an experience that would get people to “learn without realizing they were learning and to share without realizing they were sharing.”

As much as he enjoys his success as a new author, Garfield ultimately wants to become a professor who can help change the culture of academia to better support communication with the public. “Change comes most easily from a position of power,” says Garfield, “and the people I want to change are the ones above me.” Garfield hopes that by becoming a professor, he can help change the system from the inside and hold scientists “to a higher standard of communication.”

As for Squidtoons, the authors hope to expand the scope of their project in the future to include other fields of science. Be sure to follow the webcomic and pick up a copy of the book to learn more!

View all posts by Ari Remmel